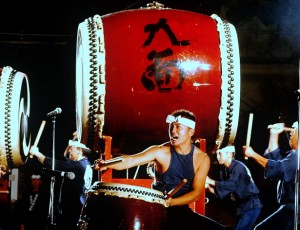 Many Taiko performances use emphatic shouts and verbal cues known as kakegoe 掛け声. Generally speaking, the term refers to a shouting out to a certain person or group, like a crowd cheering for a sports team or a musician.

Historically, the term originally seems to stem from traditional Japanese stage performances like the Kabuki theater. When searching for kakegoe 掛け声 in the Japanese Wikipedia, the entry actually relinks to an article about oomukō 大向う, a very specific orchestrated shouting technique that can be used by both the stage actors as well as members of the audience. Here, the shouts are used to announce the names of actors and indicate certain parts of the performances, while the audience uses the shouts to indicate their pleasure (or displeasure) with the performance.

In Japanese folk dances performances, particularly in the Awa Odori performed during the Obon festival, the dancers also use emphatic shouts as call and response patterns. While those shouts don’t actually have a meaning, they do help set the mood and encourage the dancers, which is something that can also be encountered in contemporary Japanese performance arts like Yosakoi (which is said to have been developed from the Awa Odori Dance) and kumi-daiko. In addition to that, kakegoe can also be used for indicating rhythm repetitions or announcing the progression into the next part of a musical piece. Regardless of how they are used, they certainly contribute greatly to the liveliness of any taiko performance.

Here is a selection of kakegoe for your perusal; long sounds are either indicated by a line – or a repetition of the consonant, sounds marked with an apostrophe ‘ indicate a sudden stop. Those of you who can read Japanese may also find the original kana transcription helpful.

Admin and creator of the Wadaiko Toshokan project.
View all posts by ushiwakamaru →

This site uses Akismet to reduce spam. Learn how your comment data is processed.